The River Forest Park District has a variety of leagues and athletic programs for adults. Click the tab below to learn more about each program or league offered.

Ages 18 & Up
This 14-inch softball league will consist of a minimum of 4 teams per division. Each team will need to field 5 men and 5 women for each game. Team captains must submit a complete team roster with a minimum of 12 players. An umpire and site supervisor are present at all games. In case of inclement weather, games will be rescheduled by Park District staff. Captains will receive a league schedule and rules prior to the start of the league. The league runs from early July to middle of September.

The bocce ball courts are a Carry In/Carry Out park site, requiring all participants to carry out any trash they generate in the park, and dispose of it at their homes.

The Game of Bocce

Bocce is played with eight large bocce balls and one small target ball called the "pallino." The object of the game is to roll the bocce ball closest to the pallino. There are two balls per person and four players making up a team. Two players from each team are permanently stationed at each end of the court for the game. A game consists of twelve (12) points. First team to twelve (12) points is the winner of the match.

Bocce is an ancient game of skill, accuracy, & strategy. It's fun to play, simple to learn, a good game to socialize with friends and no training or gear are needed. Co-ed teams are made up of 4 players per team. Must sign up as a team. There will be an 8-week schedule. 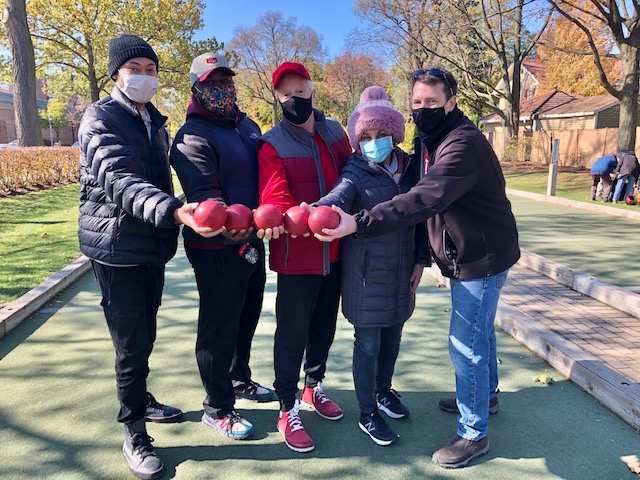